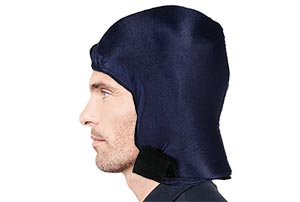 Studies consisting of a frozen cap combined with medication slows the cell death caused by ischemic strokes. Ischemic strokes are triggered when a blood clot blocks blood flow to the brain, and comprise roughly 80% of all strokes.

Clinical studies have also shown the therapeutic merits of cold therapy as a safe and effective treatment for migraine headaches. A 1989 study in Headache: The Journal of Head and Face Pain showed 64.5% of 45 patients with migraine headache or migraine plus chronic daily headache evaluated the use of a frozen cap for 20 to 30 minutes and reported the frozen cap to be mildly, moderately or completely effective. The Vasocap is durable and reusable designed to maintain the low temperature of – 30 C for a period of 30 minutes in a room temperature environment. The Vasocap must be kept in a freezer for a period of 10 hours prior to each use.

The VasoCap is made of durable hypoallergenic material designed with the patient’s comfort in mind, It remains supple and malleable even when deeply frozen. The VasoCap is guaranteed to deliver excellent results for 100 treatments when used as directed. Chemocap products are manufactured in an FDA approved facility and backed by our 2 year unconditional warranty.

When Randy Greene arrived at the emergency department last Oct. 2, paralyzed with a stroke, he got an unusual offer – spend the next 12 hours with an icy-cold helmet on his head. He agreed. Today, Greene thinks the head hypothermia treatment helped him to overcome his paralysis and make a strong recovery.

Greene, 57, was part of a study at the University of Alberta Hospital that aims to help people survive a stroke without crippling after-effects. “If it works,” says the head of neurology for the Capital Health Region, Dr. Ashfaq Shuaib, “it could boost the number of people who make a full recovery from a stroke from the current 25 percent to, perhaps, 35 percent.”
Shuaib is testing a combination treatment consisting of four drugs plus a head-cooling device, to try to slow the cell death that is triggered by an ischemic stroke. (Ischemic strokes are caused when a clot blocks blood flow to the brain. They make up four-fifths of all strokes.) “As you cool the brain’s temperature it slows the brain’s metabolic activity,” Shuaib told reporters Thursday. “By doing that, it slows down the process that kills these cells.”

That slowing down of brain death will give the brain time to find an alternate blood supply through unblocked arteries, he said. It means patients may avoid the physical and speech impairments caused when parts of the brain die.
“If it works, it’s very very exciting,” Shuaib said of the study. However, he cautioned the study is far from complete yet. To date only three patients, including Greene, have had the full treatment and three others acted as a control group.

Shuaib plans to do 37 patients on the combined treatment, plus 37 control patients. Patients in the study start their therapy in the ambulance, with a paramedic administering the first drug, magnesium sulfate. In the ER, they get the cooling device wrapped around their heads and are given the other three drugs.

The cooling wrap works by circulating cold water inside small tubes in the wrap. It is normally used for migraine headaches or to help slow hair loss in chemotherapy patients, Shuaib said. Made by the Cincinnati Sub-Zero company, it’s not been used before for strokes, he said. The experience of having one’s head cooled to 34 C was painless but chilly, said Greene. “The staff just kept bringing nice warm blankets every half an hour.” The important thing, he said, is that he went to hospital on a Sunday with his right leg paralyzed, and by Monday evening he could wiggle his toes. He’s going back to work in March.

Shuaib said the drugs used are all familiar and relatively cheap. What’s new is the idea of putting them together in a drug cocktail, somewhat like the AIDS drug cocktail, that will protect the brain from cell death in a variety of ways. The researchers hope the treatment will be effective as long as 10 hours after the stroke occurs. Right now, the top treatment for strokes is a clot-busting drug, but it’s not considered safe more than three hours after the stroke occurs because it may cause brain hemorrhage.

The study, called MINUTES or Multiple Interventions for Neuroprotection Utilizing Thermal Regulation in the Emergent Treatment of Stroke, has no big drug-company funding, he said. “The industry does not fund these trials (of drug combinations),” he said. “They’re all interested in their own drug.” If the Edmonton trial goes well, a larger trial in other cities will be done, Shuaib said.