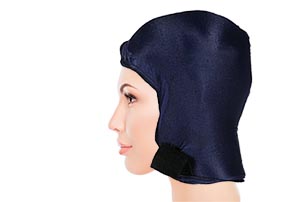 Cold as an Adjunctive Therapy for Headache

Patients with acute headache are often so vexed by pain that they seek out numerous physicians and headache clinics in search of a cure. For some, drugs do not provide adequate relief and thus nondrug remedies are appealing. In the following article, Drs. Diamond and Freitag report the findings of a study conducted recently at the Diamond Headache Clinic, Chicago, of one nondrug regimen that may be worth considering in conjunction with standard medication.

Headache has been a common complaint of humanity for centuries. Writings of the ancient Greeks and Egyptians indicate that physicians of that time were concerned with this condition. In some cases, rather drastic measures, including bloodletting and craniotomy, were reportedly practiced in the treatment of acute headache. With the evolution of medical practice over the centuries, a variety of medicinal, surgical, and physical therapies have been used to treat headaches.

Today, patients frequently report during history taking that they have used physical therapy, such as application of heat or cold, to treat their headaches. However, scientific evaluation of the potential benefits of cold application in headache treatment has not yet been performed.
After a thorough search of the literature, one of us (S.D.) recently found a single reference to cold application in headache treatment, a treatise of clinical observations by James Arnott, MD, published in 1849. Arnott reported using cold “to such a degree as will immediately numb the part to which the mixture is applied, arrest the circulation of blood through it, and even congeal the fluids contained within it.”1 He reviewed several cases of headache in which cold, or “congelation,” therapy greatly improved the condition or at least relieved an acute attack. Arnott’s patients had a variety of conditions, such as “nervous” headaches and hemicrania.

Arnott attributed the success of congelation therapy to its actions on the pathophysiology of the headache. He stated that “A morbid irritability or inflammatory condition of nerves and often of blood vessels, at a certain distance from the surface has to be removed. The severe cold penetrates to the depth required; it immediately benumbs the painful nerves; it permanently lessens their sensibility; it produces a lasting depression of the vascular system of the part. and probably otherwise modified the vital actions. By the time that this depressing or sedative influence, the morbid condition will be removed, or so much lessened as to require only a few repetitions of the same remedy to complete cure.” 2

The cooling agent described in Arnott’s book is significantly different from the cold compresses and ice packs currently in use. The mixture he used was prepared by dissolving salts in ice, which dropped the freezing point of the mixture to -17 to -23 °C (1.4 to -9.2°F). Extended application of cold to this degree could lead to freezing of skin structures, which generally occurs at -13°C (8.6°F). Damage may occur at -1°C (30.2°F). The potential for injury prohibits safe use of this type of concoction.

A commercial gel pack (Cold Comfort)* was used for application of cold in the study that we report here. The pack is self-contained, prepared for use by storing in a freezer, and is applied with a cover to protect the skin.

The gel packs, which measure 4 1/2 x 10 1/4 in. and contain 300gm of gel, were obtained from a retail store. They were stored in a freezer at 23.3°C(-10°F) and slipped into spun, non-woven polypropylene protective covers before use. The plastic shells used in the manufacture of the gel packs were used as ice bags. They were filled with ice cubes from an ice machine (cubes measured 1/4 x 5/8 x 5/8 in.) and sealed with a flat, plastic ostomy bag clip; total weight of each bag was 300gm. No protective cover was used.

The gel packs and ice bags were placed on the left calf of the subjects while they were seated. Gel packs were affixed with tape and ice bags with elastic bands. Output from a thermistor located on the skin at the point of interface with the pack or bag was continuously recorded on a strip chart, and the data were converted to degrees Fahrenheit with a calibration curve.

The gel packs were used in seven trials and the ice bags in four, and average temperature-time curves were calculated. The ice bag’s biomodal curve was due to melting and resettling of the cubes. Clearly, neither system posed a threat of freezing tissue. Because gel packs produce more rapid cooling of the skin, they probably are more efficacious for half-hour treatments.

In 1984, we studied the effectiveness of the gel pack as an adjunctive treatment in 90 patients with acute attacks of migraine, cluster, or mixed (migraine plus muscle contraction) headache. We compared treatment with standard abortive medication (eg., ergotamine oxygen muscle relaxants, analgesics) to that with such medication plus application of a gel pack to the area of pain. Since use of the gel pack was adjunctive, no attempt was made to include another physical treatment in a blind study.

Patients at the Diamond Headache Clinic, Chicago, were divided into three groups by headache type; each group consisted of 30 clinic outpatients with headache frequency of at least three times a month. Patients were permitted to continue using any prophylactic medication.

A crossover design was used. Patients in each group were randomly divided into two subsets of 15, and a series of four attacks was monitored. Group A used the gel pack and the standard abortive medication during the first two of the four attacks. For the last two attacks, these patients used only the standard abortive agent. Group B used the reverse sequence; the first two attacks were treated with medication alone the last two with medication and application of a gel pack.

A headache calendar was used to facilitate monitoring of the acute attacks. It included information on the date, time, and duration of the attack as well as they and amount of medication used and the duration of treatment with the gel pack. Headache severity was measured on a scale of 1 to 10 (1=no pain, 10=no relief).

Patients returned the calendar to the clinic after the fourth attack. At this time, an exit questionnaire was administered to evaluate the general benefit of therapy and to obtain information about the adjunctive treatment. The questionnaire particularly focused on the effectiveness of the gel pack; patients were asked about immediate and overall decrease of pain with gel pack and whether they intended to use it in the future.

The relationships between headache duration, severity, or relief and treatment or headache type were examined. Simple correlations were calculated, and analysis of covariance was used for patients who complied with the protocol and for whom data were complete. mean scores are summarized in table 2. The correlation coefficient for duration and relief was 0.23; the coefficient for severity and relief was 0.3. These slight positive correlations indicate that as headache severity and duration increased, relief with the treatment protocol decreased.

Use of gel packs is a safe method of applying cold in adjunctive treatment of acute headache. Interface temperature with such packs does not approach the range in which skin structures may be damaged. Gel packs reduce temperature more quickly than wet ice and therefore are more expedient. (A double-blind study cannot be easily performed with a physical modality such as cold.)

Our study consisted of patients at a headache clinic, many of whom have endured a long history of headache not readily responsive to therapy. These patients often do not show the excellent response to therapy that may be seen in the type of patients with headache that are usually encountered by primary care physicians. We suspect that cold application may be more effective in the later patients. Our results revealed that while improvement in headache pain for our patients was not statistically significant, most of them responded favorably to use of a gel pack for pain reduction. We conclude that cold application does not provide some symptomatic relief of headache and also offers some psychological alleviation of the pain.

We report the results of a study conducted recently at the Diamond Headache Clinic, Chicago, on the effectiveness of application of cold as an adjunctive therapy for acute headache. 90 clinic outpatients were divided evenly into three groups according to headache type – migraine, cluster, and mixed. They used the standard headache medication for two attacks and the standard medication plus application of cold with a reusable, frozen gel pack for two attacks. There was no significant difference in patient response to the gel pack by headache type. 71% of patients considered the pack effective; 52% reported an immediate decrease in pain, and 63% reported an overall decrease in pain. 71% of patients intended to use the gel pack in the future.
Use of such gel packs, which are available commercially, does not damage the skin. Our study indicates that cold application does provide some symptomatic relief of headache; it may also offer psychological alleviation of the pain. FGM
John Loperfido, PhD, of 3M Personal Care Products Division, St. Paul, Minnesota, assisted with the study reported here.

1. Arnott J. Practical illustrations of the treatment of the principal varieties of headache by the local application of benumbing cold: with remarks on the remedial and anesthetic uses of congelation in diseases of the skin and surgical operations. London: J. Churchill, 1849:3